Was There a November 14th Google Update?-(Via MOZ) 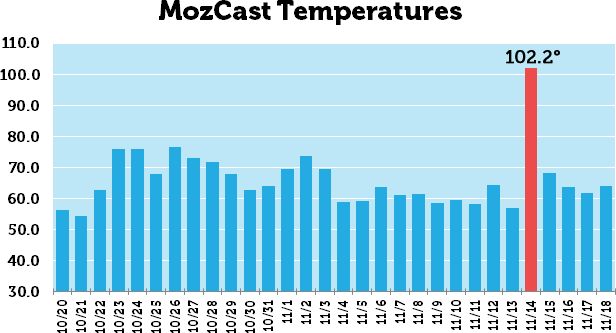 Was There a November 14th Google Update?

On the morning of Friday, November 15th, we woke up to a substantial one-day temperature spike on MozCast. Digging in, there were no signs of a glitch, and it seemed to hit across multiple IPs. The 30-day history looks like this:

Webmaster chatter seemed normal and Google has not confirmed an update, but soon other major flux-tracking tools showed one-day spikes. Here’s the data from SERPmetrics:

Both SERPmetrics and SERPs.com (that graph is a bit less clear, due to an unusually low-flux day earlier in the month) show the spike on November 15th, but one-day shifts are common due to measurement differences in the three tools.

The first thing I dig into when we see a temperature spike is a set of secondary metrics that look at large-scale trends across the data set. That morning showed a solid jump in the “Big 10,” which simply represents the percentage of total search results in the set occupied by the top 10 domains (for that day):…